The Chinese company Xiaomi Redmi has announced his new upcoming smartphone that has a dual camera on the back and much awesome specification on his phone.

Lets discussed the specification of this phone,

Apart from the water-drop display and thin bezels, a 5000mAh battery can also be found on the phone. According to the report, MIUI 10 will be based on the Android 9 Pie version. This phone can be called an upgraded version of Redmi 7A, and Redmi 7A priced for Rs.5999. Now as considering that this phone may be priced as same as Redmi 7A.

These are the specification of New Redmi 8A maybe 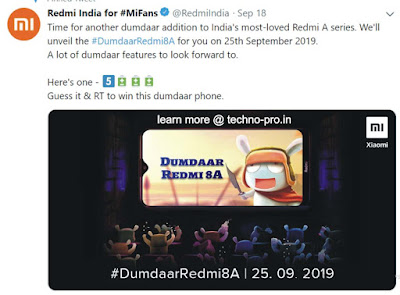 Previous Flipkart Big Billion Sale of Navratri 2019, upto 90% off
Next What is KYC , What is E-KYC, How to do KYC

What is True caller, how Truecaller works and show the owner name and advantages/disadvantages of …