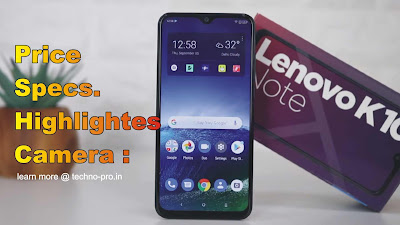 Recently Lenovo has launched his amazing phone names as Lenovo K10 Note. Lenovo has introduced three new smartphones from the entry-level to the premium segment in the Indian market. The company’s flagship device Z6 Pro was launched with a price see below. This model was paired with a Hyper Video AI Quad camera, Qualcomm Snapdragon 855 processor and 8GB RAM + 128GB ROM. Of course, this device will give a tough competition to the OnePlus 7 Series.

At the same time, the company introduced its budget smartphone Lenovo A6 Note in the tech market with a price of Rs 7,999. It had a 4,000mAh battery, 13MP + 2MP dual AI rear camera setup. Let us know that the Z6 Pro and Lenovo A6 Note was available for sale on Flipkart since September 11.

The company has also brought a new model Lenovo K10 Note in its K series. The initial price of this device is Rs. 13,999. You will be able to buy it on Flipkart from 16 September. In this article, you will get details about the features, drawbacks and X factor of Lenovo K10 Note.

In the K10 Note, the company has given a 6.3-inch display, which comes with FHD + (1080 x 2340 Pixels) resolution and 19.5: 9 aspect ratio. The company has given an LCD display panel in it. The colors in the display are quite vivid and punchy. Its viewing angle is also quite good. The display also performs quite well in outdoor light. However, in direct sunlight, you may find it difficult to read text content at times. The overall experience of watching movies or videos in K10 Note is good. The special thing is that the display comes with HDR10 support and the addition of the side bezel in the display makes it premium compared to most smartphones in the mid-rand category. However, light bezels near the notch and thick chin at the bottom of the smartphone will keep you away from full-screen entertainment. Lenovo has included several display settings in it, through which the user can set it accordingly. The smartphone has three color settings named Warm, Standard and Cool and two Saturation settings under the name Vibrant and Standard. To protect your eyes from blue light at night, you can turn on the Night Light feature in it, which filters the blue light.

In the Lenovo K10 Note, the company has given Qualcomm’s Snapdragon 710 SoC. It is an octa-core processor, built on a 10nm process. This chipset comes with Adreno 616 GPU. We have also seen this chipset in Realme X before. However, the recently launched Realme 5 Pro in the price range of K10 Note comes with a better chipset Snapdragon 712 SoC. Lenovo has launched K10 Note in two variants with 4GB and 6GB RAM. Both variants come with 64GB and 128GB storage respectively. If you find this storage less then you can increase it through microSD card. The smartphone handles moderate multi-tasking comfortably and does not take much time to load the app. The inclusion of Snapdragon 710 SoC in the smartphone makes it an even better option in terms of gaming. Apart from this, this chipset is also energy efficient, which is also the main role in battery saving.
Talking about other hardware components, the company has given a fingerprint scanner for security in it. The fingerprint sensor included in the smartphone registers fingerprints fairly fast. Apart from this, the fingerprint scanner unlocks the phone at once. However, if you want fast unlocking like the OnePlus smartphone, then this smartphone may disappoint you a bit. Apart from this, the company has also included a notification LED in it, which is nowadays seen in some selected smartphones. The smartphone includes a single speaker, but the company has provided Dolby Atmos support in it. This improves audio performance significantly. In this, you can also tune the sound according to the settings. You don’t feel much difference in hearing from the speaker, but if you try this feature in earphones, then you will definitely get the best audio experience. 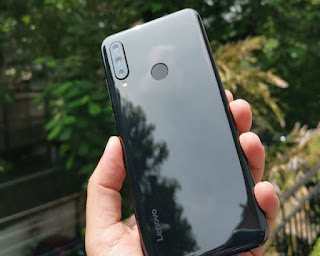 The triple rear camera setup has been given in the K10 Note. The setup includes a 16-megapixel primary camera, which comes with f / 1.8 aperture. Apart from this, it includes an 8-megapixel telephoto lens, which comes with 2x optical zoom and f / 2.4 aperture. The third sensor is 5-megapixel, which is a depth sensor. In terms of price, the 2x optical zoom feature in the smartphone gives it one point more than the other mid-range smartphones. However, there is a significant difference in the quality of photos of optical zoom.
In standard 2x pictures, color is slightly dull in pictures taken and there is also a lack of detail. The 16-megapixel primary camera takes good pictures in day-light / outdoor light conditions. The background color is very rich in pictures. However, you may find the photos overexposed at times and the colors do not look natural.

The company has given a 4,050mAh capacity battery in the K10 Note, which comes with 18W fast charging support. After testing, I found that this battery gets about 30 percent charge in 30 minutes charge. Battery performance is quite good in moderate usage. In about 5 hours of moderate usage, the battery was reduced by 45 percent, in which I listened to music for about 1 hour continuously, played social media apps for a while and also played some other games including about 50 minutes of PUBG. If you are a heavy task user, then you may have to put it in charge as the day ends.
Talking about gaming, Snapdragon 710 SoC and Adreno 616 GPU allows you to play most of the games in it comfortably. I played the PUBG Mobile game on this smartphone and the game was played comfortably in high graphics settings. Due to the support of HDR10 in the smartphone, you can also play this game in HDR settings, but currently, this option is not available for this device. The smartphone feels light after 1 hour of continuous gaming. The temperature of the device is mostly enhanced by the area near the camera. However, this heating is not very much. So you can do mobile gaming without any problem in it.

Lenovo K10 Note includes Android 9 Pie-based custom skin ZUI 11. As soon as you turn on the smartphone, a lot of bloatware (unwanted apps) are first seen in it. Of these, you can uninstall many apps, but some apps you will always have to deal with or disable them. The company has given it a feature called 4D U-Touch, which enables gestures by replacing the navigation button of the phone. If you have run a stock Android device before then you will have some difficulty in running its navigation gestures initially, but in some time you will get used to it. 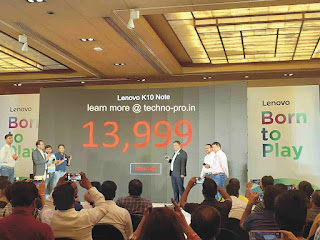 The Lenovo k10 Note is priced for the variant of  4GB/64GB variant at 13,999 onwards, while it’s other variant 6GB/128GB variant is at Rs. 15,999.
Conclusion – How are your plans for buying this phone, tell me in the comment box, I want to know the audience experience about this phone
Share