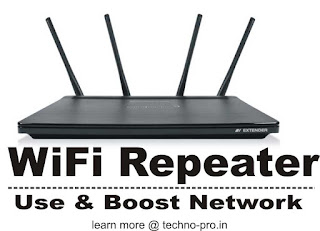 Do you know what are these word used for ???
Hmmm…
These words are commonly used in the area of networking. Have you heard the word Wifi repeater?
.
.
This is a type of device that allows the user to make a signal of wifi very strong. Many times users use some other wifi but due to some technical reason or any other reason the signal which is good at that time but now becomes something low, so in this way, you need a signal booster that maybe you called Wifi Repeater.
Let’s know in brief about the meaning of Wifi Repeater

A Network Repeater or Repeater is a powerful network device that is used to regenerate signals when the current signal should go for very long and in this way, the signals of any sources can travel in the constants speed.
One very important thing about repeaters is that repeaters do not amplify the signal. When the signal becomes weak, then they copy the signal bit by bit and then regenerate it to its original strength. It is a 2 port device. Repeaters are used to establish an Ethernet network. A repeater is located in the first layer (physical layer) of the OSI layer. Repeaters are used in cables that have to cover distances of up to 100 meters. They are used to receive signals from optical fibers, copper cables, and coaxial cables.
Repeaters can also be used to develop many important tasks such as regenerating the microwave from a satellite; Such repeaters are called transponders. Therefore these devices are also used to carry electric as well as light signals.

What is wifi repeater and how does it work?

Like wireless routers, wireless repeaters are now also available in the market. Wireless repeaters are used to increase the range of wireless signals, there is no need to embed any more wires or devices. If you need an instant and an efficient boost in your deteriorating signal strength, then you need to install a wireless repeater between your computer and WAP.
If we understand the process of working, then wireless repeaters receive radio signals from a WAP and re-generate them and then deliver them in the form of frames. The use of wireless repeaters offers an operator sufficient convenience so that they can use wireless repeater in place of adding more access points.
These repeaters can help overcome a very major weakness of the wireless system. This major weakness is signal attenuation. Wireless repeaters are very capable of increasing the coverage of wireless signals.
When a repeater is placed in a remote location, where network signals can travel, but becomes very weak. Connectivity in these places increases with the use of these repeaters. For example, if a man travels for his research project, then he can carry a wireless repeater with him; So that it can regenerate signals using the repeater. With this, all her communication gapes can be easily makeup and she can get signals without interruption.
A Start Network topology is being used inside the Repeater, When access is provided to each individual unit in a LAN to communicate directly with a central device or hub, then it is called star topology. Understand the definition of topology, then it is a physical set up so that a network connection point can be established. In this central device is called a multiport repeater. The main purpose of this repeater is to allow this signal to be fixed long distance. Multiple ports Ethernet repeaters are used to reduce star topology cabling deficiency. 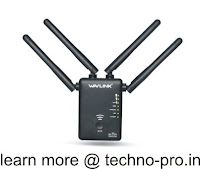 A repeater is the best technology for boosting the inter-connection of Network, let’s know the detailed feature of Repeater –

In digital communication systems, a repeater is a device that receives a digital signal in an electromagnetic or optical transmission medium and then regenerates it into the next medium.
In electromagnetic media, repeaters overcome the problem of attenuation that arises from free-space electromagnetic-field divergence or cable loss. By using a series of repeaters, it helps in extension of the signal to determine long distance.

Disadvantages of a repeater?

Advantages of a repeater?

If any technology has involved in the world, then it also creates some advantages and disadvantages also. Here are some list of disadvantages of Repeater –
Conclusion – I hope you have clearly learned the use of repeater if you have and problem/query/suggestion then you can ask me through the comment box