What is True caller, how Truecaller works and show the owner name and advantages/disadvantages of Truecaller and more  – 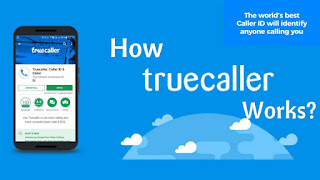 In today’s day, almost everyone must have gone from truecaller. Most people use truecaller to know the owner name of an unknown number. Everyday, all people have a lot of spam calls, that is, calls are received by a company, which you get to know only after receiving the call, but if you have truecaller apps in your mobile then before you receive the call. The name of the owner of that number will be known.

Truecaller is adding new features to its apps day by day. Banking facility has been provided in this apps some time ago, through which you can manage your bank account through Truecaller apps, meaning that you can check your bank balance and transfer money as well. So let’s know about truecaller in full details.

Truecaller is a mobile application that has been developed to extract the details of any mobile number. It displays the owner name of apps incoming calls so that you can avoid receiving unknown number or any company call.
Some time ago, when there were no truecaller apps, then we could not know about any unknown number without calling it and many company calls used to get disturbed due to which we got upset but ever since truecaller apps have developed, we have got rid of spam calls.
This apps was developed by Swedish company True Software Scandinavia AB. These apps are available for almost all platforms such as Android, iOS, BlackBerry, Windows Mobile, Symbian and Series 40.

Many people do not know from where the owner’s name comes from the truecaller? Friends, when you install any apps in your mobile, those apps ask you for some permission such as contact access, message access, photo and video access, etc. When you give him permission to access it, he stores the data of your mobile in his storage device.
In the same way when you install the Truecaller apps, it asks for permission to access your contact and message. When you give this permission, then it stores your data in its storage device. Now suppose that your contact has a number of 100 people saved, then that number of 100 people reaches the truecaller with the saved name so that the truecaller shows the owner name of that number to another person.
Sometimes it happens that we save the number of our house with the name Papa, uncle etc., then the truecaller only has the owner name of that number, Papa or uncle store, from which he shows the other person the name of the father or uncle.
Also read –

Truecaller apps have been developed by True Software Scandinavia AB company. The company is a private company based in Stockholm, Sweden. The apps were founded in 2009 by Alan Mamedi and Nami Zarringhalam. Sweden is a country whose capital is Stockholm where the True Software Scandinavia AB company is located.
It was initially launched by BlackBerry on 1 July 2009. After receiving good response from users, it was launched for Symbian and Windows Mobile phones. Launched for Android and Apple iPhone on 23 September 2009. For more history visit Wikipedia.  These apps are still being used in more than 70 countries. There are crores of its users.
Also read –

Meaning of last seen in truecaller –

Concsluion – Truecaller apps are very popular apps that are used by crores of people. These apps get you rid of spam calls. Some people think that using it is a big risk, but it is not. It is different that the data of this apps was stolen many years ago, but information like credit card number and password was not stolen in it. Now these apps exist with very security which keeps the user’s data very secure.
I hope you liked this post very much. Do share it with your friends and also give your feedback as well.
Share

What is Android Root | Advantages and Disadvantages of rooting