How to call someones if they block you in easy steps –

Friends, sometimes we need to call such a number, whose number is blocked in our mobile, but we cannot call it because we do not have a new number. If you too are struggling with this problem then this post has been brought for you.
In today’s day, there is often a fight between Girlfriend and Boyfriend due to which either your girlfriend blocks your number or your boyfriend blocks your number, and if you do not have another number, then you are not able to call your Girlfriend or Boyfriend. 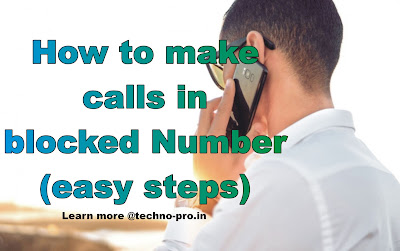 But now you have no need to panic, in this post, I will tell you about such apps that provide the facility to call even the block number. Although it is not good to use all these apps, but if it is very important, then you can use these apps and uninstall all these apps after using them, otherwise they keep storing your personal data in your storage device.

How to call on block number –

You need to have a Smartphone to make a call to the block number using this method because to use this method you have to install apps on your phone.
Now you end the clock waiting and tell about those apps that provide the facility to call the block number.
The first apps are Webphone. It talks about providing the facility of free phone calls but does not provide free phone calls. But yes, up to 2 Minute free phone calls are provided. Apart from this, if you want to make a call through these apps, then you will have to recharge for that. In this, you will get the facility of PayPal or Google play store to recharge. The calling rate of Wephone apps is different according to different countries (country), which you can see by going to the play store.

Are these apps correct? Is it correct to use them? block number –

Whenever we know about a new product, we also try to know about its advantages and disadvantages. In the same way when we hear about any new apps, we try to know about its advantages and disadvantages so that there is no problem in the future.
Some people feel that it will not call, so let me tell them that I have used both these apps, only then I have written the post. You can use it easily.
Now know if it is right to use it? Friends, let me tell you that it is not right to use all these, because they access your contacts and media (photo, video), which is not right for the purpose of security. If you need too much to call a number whose mobile has your number block, then use it.
Before using it, you should remove all private photos and videos from your gallery so that they cannot access your private data.
And secondly, never do more personal things through these apps because these apps record your audio.

How are all these used –

As I said above, it is very easy to use all these apps, just you have to install it in your phone and then follow some simple steps. These apps will also ask you for some permission which you have to allow only then you can use this app.
When you finally enter in apps, you will get a dial screen in which you will have to enter the number and after that you can easily call. When you call your friend, then a new number will be called by him, which is the number of other countries.

If you also want to call a number whose mobile has your number block, then this post was for you only. You can also call the block number using the apps mentioned above.
After using all these apps, uninstall it. Before uninstalling, go to Apps permission setting and remove all the permission given to this apps so that your data cannot reach them. I hope these apps will help you in calling the block number, do share this post with friends.
Share

What is Android Root | Advantages and Disadvantages of rooting