Do you know WiFi has been invented accidentally

Do you know WiFi has been invented accidentally and by a wrong way, check for more below –

Wi-Fi is a technology that allows devices to communicate without an Internet cord. A wireless LAN (wireless local area network) is represented by a wifi network for technical specifications. Which works on the 802.11 AEEEE network standard.
Today, Wi-Fi is the most popular wireless data communication technology within a fixed location, as well as internationally a wifi agreement to connect companies via LAN, but, do you know how wifi finally came? So let’s talk about it today. 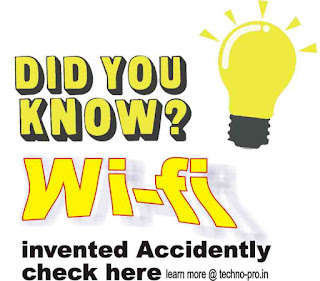 The story of the Wifi invention comes from a discovery of Stephen Hawking’s theory of evaporating black holes and their radio waves. A scientist named John O’Sullivan who was inspired by this theory and wanted to vindicate. It had in his research such weak signals (Radio Waves), which were difficult to make out of the noise of the strong radio rays of the interior universe. He concluded from his research that since these discovered radio signals cover a long distance in the universe, they are very short and are distorted by dust and gas in space. Therefore, their entire waveform transforms into a flat curve with a sharp and easily recognizable form.
also, read –
So served Sullivan and his colleagues had to work on a device that could identify and filter radio waves of any kind. And finally, the succeedingSullivan and his colleagues succeeded in creating a device that was based on a mathematical formula that could help them find it by blocking other unnecessary radio signals and identifying them as useful.
Although unfortunately, they could not manage to catch the black hole radio waves, now they had laid the foundation of the WiFi era. This is just after 1992 when people joined Sullivan, an investigative team of CSIRO, which was working on connecting the computer to the computer in a wireless way. The same invested Sullivan suddenly got the idea about the radio waves of the black hole and the previous research on the devices he created. Since the tools they developed were able to identify signals wirelessly.
Therefore, they decided to use the mathematical formula used when catching blackhole radio waves for the development of wireless communication between computers. He found that by modifying his previous research, he could not only build a strong foundation for Wi-Fi but also trees, and thus the discovery at the Blackhole worked on today’s WiFi. Due to the re-applicability of previous research, WiFi was placed on the list of undisclosed inventions.
The same was attributed to CSIRO $ 1 billion in royalties. It was then patented by O’Sullivan in 1992 for the first time in his own country of Australia, WiFi Technic. Gaya, the same by the US in 1996. Eventually, we learned that Wi-Fi technology was an accidental invention. Thank you, Stephen Hawking, for motivating yourself. And, thank you, for making Sullivan’s world of Wi-Fi.
Share